In part 21 of the 52 Week Lecture Series of “The Time and What Must Be Done”, Minister Farrakhan addresses an issue that has purposely blown by and through the American public. It involves the possibility of World War III as a result of food famine through the use of GMO’s and neonicotinoids by big companies such as Monsanto, Dow, Bayer, Syngenta DuPont and Dow; who control nearly 100% of the world’s genetically modified seeds, pesticides and insecticides.

Neonicotinoids, also known as neonics, are a class of neuro-active (acting on the central nervous system) insecticides that cause paralysis and death. Developed by Shell and Bayer, they are either used on crops to deter pests or inserted into the actual seed of a plant, making it a GMO product.  Some researchers are finding that these substances are affecting the world environment on a massive scale. According to the Agricultural Department, a quarter of the American diet depends on bee pollination, which includes, apples, cherries, watermelons, and onions, which could result in higher food prices because less of these foods would be produced. 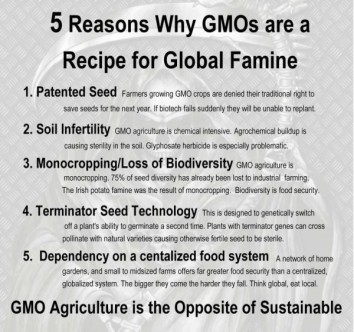 In October of 2012 the USDA held a conference that addressed various issues affecting the bee population. In their report (though there is a disclaimer that everything in the report is not necessarily supported by the EPA, USDA and US government) it is agreed by participants that, “Acute and sub-lethal effects of pesticides on honey bees have been increasingly documented, and are a primary concern. Further …research is required to establish the risks associated with pesticide exposure to U.S. honey bee declines in general.”  So, although the government is aware there is a primary concern for the effects of these substances, they still want to keep them in use while they do their “research” at the same time.

The European Union’s European Food Safety Authority (EFSA) did their own report in January and as a result on April 29th placed a 2-year ban on certain neonics.  According to their press release, “A number of recent studies have suggested that exposure to neonicotinoids at sub-lethal doses can have significant negative effects on bee health and bee colonies. France, Germany, Switzerland, Russia, Slovenia, Ukraine and Italy have already implemented temporary suspensions.

On March 28th President Obama signed House Resolution 933 (HR 933) into law that carried a very interesting rider along with it.  The rider, an additional provision attached to a bill, was anonymously slipped into the must pass HR 933, an emergency spending bill that had to be passed in order to prevent government shutdown toward the end of September of this year. Because this bill had to go through, the “Monsanto Protection Act” was born without any debate or rebuttal. Days later, the anonymous inserter was  revealed to be none other than Sen. Roy Blunt R-Mo., who represents the home state of Monsanto. This act gives Monsanto the rights to plant and grow genetically modified foods that have been approved by the USDA with or without the approval of the federal courts. Also, if anyone gets sick from any of their products, it protects Monsanto from any wrong doing on their part; meaning no lawsuits can be filed against them.

So how would all of this lead to World War III? Remember Barry in the Bee Movie? When he won the lawsuit against the government and they gave back all the honey to the bees so they didn’t need to pollinate anymore? And as a result the beautiful landscapes slowly withered away and died? The same would happen in this case causing food shortages and worldwide famine, as if we are not suffering from this already. Also, with Monsanto and other companies holding on to patented seeds, it could lead to a centralized food market owned by a few.

I must question The Government of America: Are you permitting the killing of American people by signing into “law” the “Monsanto Protection Act”—a law written by Monsanto, and led by Senator Roy Blunt (R-Mo.), making Monsanto exempt from prosecution for the use of “Genetically Modified Organisms” [GMOs]?~ Minister Louis Farrakhan 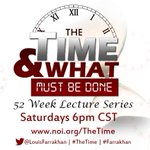 One thought on “What Do Monsanto, Your Food and World War Three Have in Common?”